Better pics of TS185 and GT185 bikes:
You do not have the required permissions to view the files attached to this post.
Top

Phoenix wrote: - Pulled carburetor and disassembled. One issue found after disassembly was a damaged o-ring. The o-ring basically seats between the needle jet and main jet, in a pocket in the bottom of the fuel bowl). A damaged o-ring will allow the fuel in the bowl to pull directly into the needle jet along with fuel coming from the main jet. Damage to o-ring may have occurred during earlier assembly operations when installing the fuel bowl onto the main carb body. When reassembling the carb, seating the o-ring into the pocket of the fuel bowl is tricky.

I am no expert on the TS185, but that doesn't seem like the correct part being used. Never seen a round oring there before on a Mikuni - usually more of a flat seal. 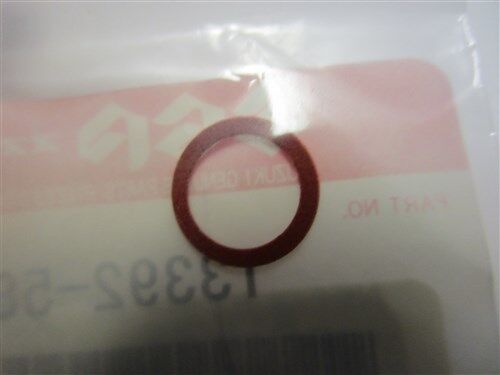 Does your carb have the main jet in the union bolt at the bottom of the float bowl? that is very similar to the 75 yamaha DT175, (dirt always settles to the bottom and clogs the main jet.) You are right with the torn o-ring it will suck excess gas from the bottom of the float bowl and be to rich a mixture.
I think O-ring part number is 13294-28010. Part # 9 in the breakdown at alpha sports, and suzukipartshouse under ts185k not ts185a
Nice bikes

I was replacing the main jet and adjusting the jet needle. Same stall issue at full throttle. Chasing my tail….time to regroup.

Spoke with Steve (Suzuki guy) at the cycle shop and he steered me back to the basics of the fuel flow (pilot jet, needle jet and jet needle, main jet and float level). Steve indicated the main jet and float were likely culprits. A lot of the same advice I received from all on the Sundial participants (check jets and float settings).

Carburetor back to the workbench.....

- My float level / arms were off quite a bit....this set the fuel level in the fuel bowl too low. Adjusted again and measured per specs in Clymers. Float arms are now almost parallel to body of carburetor. The Clymers manual had limited info, I misunderstood the adjustment detail.
- Also, the o-ring in the bottom of the fuel bowl (between main jet and needle jet) was damaged again. This caused excess fuel to bypass the main jet and flow into the needle jet. The area in the fuel bowl where the o-ring seats (pocket) was corroded and rough...cleaned the pocket area with a drill bit and sanded fine with emery and 400 grit paper. Custom fit with new o-ring. During reassembly of the carburetor, made sure to oil the o-ring/pocket area with 2 stoke oil to allow the o-ring to slide easily into place.
- Changed pilot jet back to original size 17.5, from 25, while I had the carburetor apart.
- Reset clip on jet needle back to center position.

Carburetor reinstalled in bike, drove very hard for an hour and no stall

. Issue corrected. I think the main culprit was the float level (low fuel in bowl) which may have actually run the carburetor dry (momentarily) at full throttle. The leaking o-ring contributed to the flow. See attachment.

Will run the bike for a little longer and check the plug for color. Turned out to be simple issues, but this exercise gave me a much better understanding of Mukuni VM slide carburetors.
You do not have the required permissions to view the files attached to this post.
Top